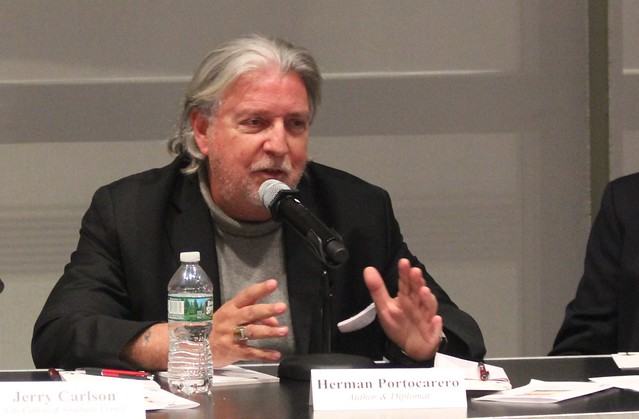 Author and diplomat Herman Portocarero, former ambassador to Cuba from the European Union and Belgium

This conversatorio will draw heavily from the just published, Havana Without Makeup: Inside the Soul of the City by Herman Portocarero (Turtle Point Press, 2017; photography by Joaquin Portocarero). Illustrated with original photographs, this volume presents a unique account of Havana’s history, its present, and what its future may hold.

Havana without Makeup, an insider’s view of Havana, offers a wide-ranging exploration of its many complex facets. It aims to capture the soul of a city and a society that have evolved on their own terms at the moment before they face inevitable transformations. Opening on the eve of the announcement of reconciliation between the U.S. and Cuba, the book then looks back at the cultural, political, economic, and religious influences that led up to this historic moment and beyond. Examining all things Cuban–racial issues, la revolución, baseball, Hemingway, communism, synagogues, Santeria, Cimarron culture, and much more–Portocarero overturns every stone in his endeavor to bring us inside the city he loves.

Herman Portocarero is a Belgian-born writer and diplomat of Spanish and Portuguese descent. He served twice as Ambassador to Cuba — representing Belgium in 1995-1999 and the European Union during 2012-2017. He has published more than twenty works of fiction and nonfiction, including the Hercule Poirot Prize-winning crime novel New Yorkse Nachten (New York Nights).

Jerry Carlson (Ph.D., University of Chicago) is Director of the Cinema Studies Program in the Department of Media & Communication Arts at The City College, CUNY. He is a specialist in narrative theory, global independent film, and the cinemas of the Americas. He is a member of the doctoral faculties of French, Film Studies and Comparative Literature at the Graduate Center, CUNY and a Senior Fellow at the Bildner Center for Western Hemispheric Studies.