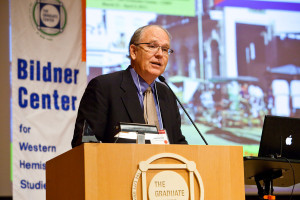 Mauricio Font is director of the Bildner Center for Western Hemisphere Studies and Professor of sociology at the Graduate Center and Queens College, City University of New York.

His research examines problems of development and reform in Brazil, Cuba and Latin America as well as international cooperation in the Western Hemisphere with particular attention to reform processes in Latin America. Professor Font has recently completed The State and the Private Sector in Latin America (Palgrave, forthcoming).

Professor Font has also published other essays on Latin America, the North American Free Trade Agreement and US-Latin America relations, and the comparative-historical study of development trajectories in settler societies. He is regularly interviewed by the US and inernational TV, radio and print news media.