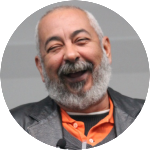 Leonardo Padura, essayist, novelist and screenwriter is the recipient of a number of awards, including Cuba’s 2012 National Prize for Literature, France’s 2013 L’Ordre des Arts et des Lettres, Spain’s 2015 Princess of Asturias Award for Literature among others.

Mr. Padura has been a guest of The Cuba Project at The Bildner Center in the past, the last one being a conversation in Spanish with CUNY professors Jerry Carlson and Jaime Manrique in February 2014.
Watch A Conversation with Leonardo Padura at the Bildner Center.